“This project was important to us because it’s so close to home,” said Nikki Copenhaver, project coordinator, CR Electric. “We do a lot of sponsorship with Liberty schools, and we are happy to be a part of this stadium work. We are excited to see the new finished turf field and scoreboard under these bright new LED lights.”

To begin the weeklong project, Josh Alexander, a foreman at CR, first inspected all of the light poles surrounding the stadium to understand the materials needed.

Next, he, along with members of the CR Electric team, began swapping out old halogen lights for the new LED lighting fixtures.

“These fixture are going to dramatically reduce energy usage,” Alexander said. “The life expectancy will also be longer, which means less maintenance in the long run.” 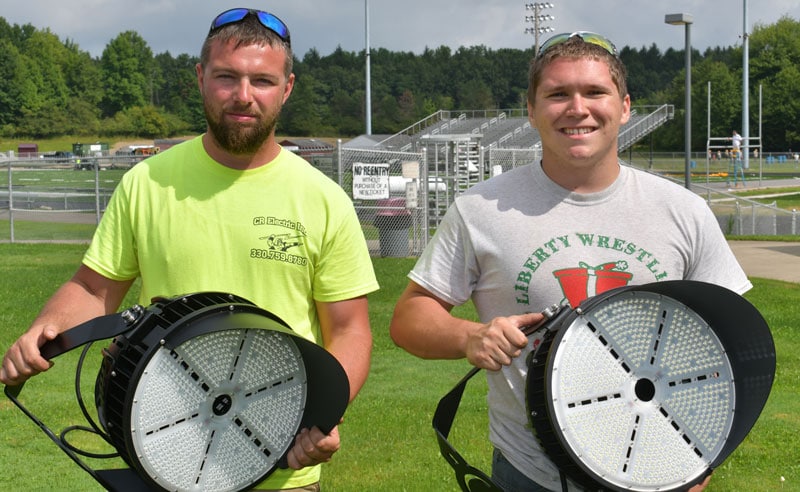 And the brightness will definitely be noticed during home games.

“Along with being brighter, these new lights are a better color and will cut back on power usage,” Alexander said.

Growing up just down the road in Girard, Alexander feels fortunate to have been part of this project.

“Working here at Leopard Stadium has been a blast, and the lights will be outstanding for Friday night games.”

CR Electric is a member contractor of NECA-IBEW Electricians, an association of signatory Mahoning Valley electrical contractors and IBEW locals in Youngstown and Warren.